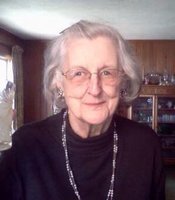 Mrs. Martha Jean Berry Robertson, age 90, of Albany, GA passed away on Saturday, December 28, 2019 at her residence. Mrs. Robertson was born in Madison, GA on Thursday, February 14, 1929 to the late Clarence Eugene Berry and the late Ila Louise Harris Berry. She was also preceded in death by her beloved husband, Charles Eugene Robertson, Sr. and dearly loved son, Charles Eugene Robertson, Jr. Known as "Jeannie" to all her friends, Mrs. Robertson was primarily a homemaker. Prior to marriage, she worked with the Bank of Madison. After her children were older, she worked several years at the First Citizens Bank in Covington. An extremely creative person, she was known as an artist, a master seamstress, a fine needle worker, a gardener, and a lover of all animals. She could build or do anything she set her mind to doing. Jeannie is survived by her daughter and son-in-law, Marcie Robertson & Gregg J. Seleb, grandson, Benjamin R. Seleb, and caregiver and special friend, Patti Stam. A funeral service for Mrs. Martha Jean Robertson will be held at 11:00 A.M. on Tuesday, December 31, 2019 at the Barnesville Presbyterian Church with Reverend Karen Mitcham officiating. Graveside services will follow at 2:30 P.M. at Fairview Cemetery in Madison, GA. In lieu of flowers, people can make contributions to either the DeKalb County Humane Society, 3280 Chamblee Dunwoody Rd, Chamblee, GA 30341 or the Dolly Goodpuppy Society, P.O. Box 361, Barnesville, GA 30204. Those who wish may sign the online guest registry at www.williams-westburyfuneralhome.com Williams- Westbury Funeral Home, 526 College Drive, Barnesville is serving the Robertson family.