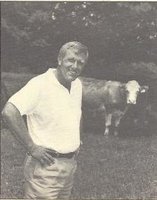 Edwin D. Foshee, Jr., age 75, died at Providence Nursing Facility in Thomaston, GA on June 13, 2020 after a long illness. He was the son of Edwin D. and Dorothy Daniel Foshee of Barnesville. He is survived by his brother, Danny Foshee, and wife Coopie (Vidalia, GA), his nieces, Meredith Thompson and husband, Les (Smyrna, GA), Elizabeth Wu and husband, Chris (New York City, New York) and his nephew, Daniel Foshee and wife, Naomi (Loganville GA). Jake and Ashden Foshee, Andrew and Eliza Thompson, and Oliver and Theodore Wu are his surviving great nephews and niece. He received both Bachelor of Science and Master of Science degrees in Animal Science from the University of Georgia. After graduation, he worked in Washington DC and Chicago, IL with the government and animal health corporations. He moved to Barnesville in the late 1970s, raising Simmental cattle on the family farm, working at Akins Feed and Seed as a farm consultant, and later taking care of his mother in her last years of life. His love of farming and cattle lead him to help farmers with their beef cattle by sharing his knowledge and ideas. He was active in helping FFA and 4-H club members become future farmers and cattlemen/women using the Danfowin farm steers. He was a member of the Georgia Farm Bureau, the Chairman of Lamar County Soil and Water Conservation District in 1989 and on the Board in 1997. He received the Dr. O.E. Sell Award for Distinguished Service, was a Certified Purina farm consultant/Honor Council, and a lifetime member of the University of Georgia Alumni Association. Edwin was actively involved with numerous cattle and agricultural organizations and was the Purebred Cattleman of the Year by the Mid Georgia Cattleman in1990. He was a member of the Georgia Cattleman’s Association, Mid-Georgia Cattleman’s Association where he was President 1978-9 and Secretary-Treasurer 1983-4. He, his father, Edwin D. Foshee, and brother, Danny Foshee, formed the Danfowin Farm which has been a member of the American Simmental Association since 1973. Under Edwin’s expertise from 1984-2014, he raised bulls that received numerous awards in Calhoun, Tifton, and South Carolina for high and top performing bulls, high and top indexing bulls, and overall top indexed bull. Five cows of the Danfowin Farm were honored by qualifying for the 1997 National Cow Performance Awards (American Simmental Association) receiving 3 excellent, 1 superior, and 1 elite Award. They were listed in the special cow summary of the Register1997, May ASA publication. He was a lifelong member of the First United Methodist Church of Barnesville where he served as Finance Chairman for several years and was a devoted member of the choir. A private graveside service for Mr. Edwin D. Foshee, Jr. will be held on Tuesday, June 16, 2020 in Greenwood Cemetery with Reverend Cyndi MacDonald officiating. In lieu of flowers, please send donations to the First United Methodist Church of Barnesville. To sign the online registry or to send a condolence online, please do so at www.williams-westburyfuneralhome.com Williams-Westbury Funeral Home, 526 College Drive, Barnesville, is serving the Foshee family.