Leave a condolence, share a memory, post a photo, light a candle and more with our beautifully designed interactive online tributes. Pre-planning and pre-paying your funeral is one of the most thoughtful gifts you can give to your family. Don't wait! Start Your Pre-Plan Today. Our local florists are committed to offering only the finest floral arrangements backed by their professionalism and prompt service. From funeral planning, arrangements throughout the final days, and afterward, we want to make sure you are completely satisfied with your funeral arrangements. 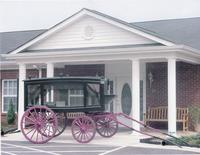 In 1964, he moved, with his wife and three children, to the City of Gordon and opened the first funeral home in Wilkinson County. In doing so, he gave Wilkinson County it's first ambulance service. The business grew, and in 1969 he purchased land in Milledgeville and built the first building in Milledgeville to ever be specifically designed to be used as a funeral home.

As time passed, both funeral homes saw constant growth because of the Williams Family's dedication to serving the families of Wilkinson, Baldwin, and surrounding counties with the best possible service and caring and compassion. In 1981, James wanted to get back closer to his original home, so his son Rick took over operations in Milledgeville. James moved back to Barnesville and built the first building in Lamar County to ever be specifically designed for use as a funeral home.A few years later, as business continued to grow in all three of the towns, Rick also took over the operations in the town of Gordon.

After a few years, Rick was operating the funeral home in Milledgeville along with his wife Donna and his son Spencer. James' oldest daughter, Brenda was running the funeral home in Gordon, and James decided once again that it was time to move back closer to his original home. In 2001, James moved back to Barnesville and built a new facility.

After a year of being back in business in each town, the Williams family had taken all of the business back from the corporate owned funeral homes that used to belong to them. In Barnesville, James actually purchased his old building back after the corporation shut it down in November of 2002, and he moved his operation back into his original building.

Now in its third generation, the Williams Family has continued to grow the business, and is still serving the families of Middle Georgia with Dignity, Honor, and Respect. Williams Funeral Home is not just a funeral home--they are a friend of the family.